During heavy air and naval bombing, Allied boats arrived at Normandy on June 6, 1944. In the early light of dawn, the soldiers struggled to reach the beaches. On Utah Beach, they quickly defeated the German forces and joined up with their air support once inland. But, on Omaha Beach, they faced heavy enemy fire in terrain that left them vulnerable; vertical cliffs were another obstacle that led to the loss of life. Despite this, the Allies had control of Omaha Beach, and within a week of D-Day, more soldiers were able to land on Normandy’s beaches and ensure victory.

Your tour begins in central Paris, where you’ll board an air-conditioned bus with your expert guide. As you travel to Normandy, your guide will teach you about the region, pointing out sights along the way. They will share stories about World War II, describing the meticulous planning that led up to D-Day and the largest amphibious attack in history. They will also explain how and why some of these carefully crafted plans came undone. Whether you’re a history buff or not, you're bound to have questions and curiosities, which your guide will happily answer.

Your first stop is Utah Beach with its extraordinary museum, housed in an old German bunker directly on the landing beach. There are other D-Day museums, but this one has the best exhibition on Operation Overlord, including personal stories, as well as an original B-26 airplane, one of only six in the world and the only one in France. You’ll see actual soldiers’ letters and personal artifacts that reveal the human side of war. The natural beauty of the beach you stand on is a sharp contrast to the events that occurred there.

You’ll then take some time out to relax and experience the culture and traditions of Normandy. You’ll tour a 17th-century barn and sample regional apple cider and Calvados, a type of apple brandy. Allied soldiers found shelter in farms much like this one. Then, we’ll go to a quiet port for a two-course lunch in a local restaurant.

Ponte du Hoc offers incredible views over the English Channel. At the same time, you’ll still see trace bomb craters as well as seemingly insurmountable cliffs, which will give you a new understanding of the many obstacles that the soldiers of D-Day had to overcome.

One of our most emotional stops, if not the most emotional, is the American Cemetery at Colleville-sur-Mer. With 10,000 white crosses throughout, the name of a fallen soldier is engraved on each. This huge cemetery will make you aware of the colossal death count of D-Day. You'll have time to look around the cemetery, visit the wall of the missing and awe-inspiring memorial, and look down on Omaha, the beach where the allies faced the stiffest resistance and suffered the most casualties.

Our D-Day Normandy tours from Paris will re-create memories of tremendous courage and sacrifice. At the end of the day, you will have a new appreciation of the history and beauty of Normandy – and memories that you won’t forget. 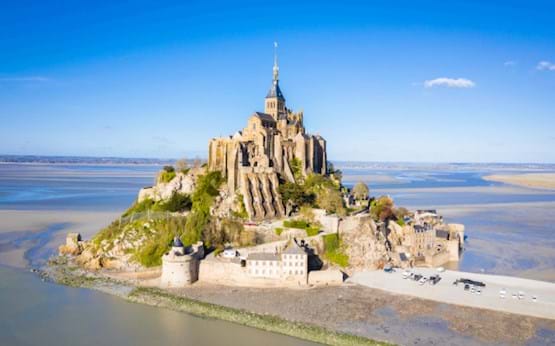